Home > Help > Translate TunePat and Get a Free License

Translate TunePat to Your Native Language and Get Reward

TunePat Inc. is glad and grateful to receive so many requests from warm-hearted volunteers to translate our software. From now on, translators of most of language(s) are invited to help us enrich TunePat product's multi-language database. In this way, all our worldwide users can enjoy localized TunePat software with ease.

There is still a great demand for the language versions below:

If your language is in the list above, please join our effort on perfecting TunePat Music Converter by translating them into your native language or into any other language that you are specialized in. Software translation doesn't require any technical knowledge. In fact, it is quite simple and anyone who has a text editing tool like Notepad++ (Download Now!) can get it done easily.


What You Will Receive as a Reward?

All volunteers who make a contribution to the translation of TunePat will be acknowledged on our website.


How to Start Translating TunePat to Your Native Language?

If you'd like to help us translate TunePat products to your native language, please contact us at [email protected] via email to ask for the latest translation files.

After opening a text file with NotePad++, you must select “Encoding” - “Encode in UTF-8-BOM” from the menu as follows. 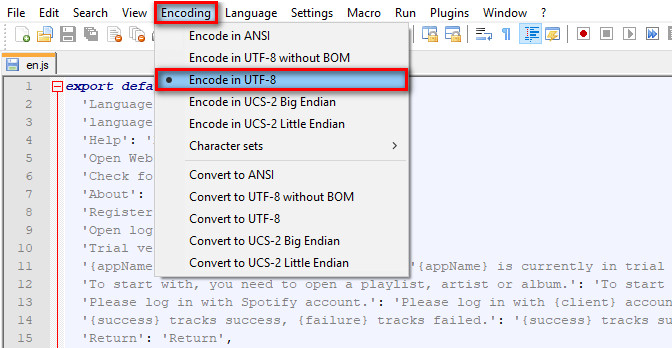 Then, you can start translating the TunePat strings into your own language after referring to the following tips:

Step 4: When the translation is completed, please email us the document to our support team at [email protected]. We will check and update our TunePat program with the new strings in the next version ASAP.

The following translators/developers had contributed in translating the TunePat program. We hereby thank them for their contributions.

English version, up to date, by TunePat Inc.

German version, up to date, by Nicole Huang.

French version, up to date, by April Zhong.

Japanese version, up to date, by Tilly Zheng.

Georgian version, up to date, by Zaza.

Brazilian Portuguese version, up to date, by Amílcar Henrique.

Spanish, Portuguese and Italian versions, up to date, by Andres Cheung, and Manuel Ortega.

Indonesia and Javanese versions, up to date, by Satoru Okuhara.

Chinese Simplied and Chinese Traditional versions, up to date, by Ashley Wu.

Dutch versions, up to date, by Tom Mylle.

If you have any question about the translation project, please don't hesitate to contact us at [email protected].